Bike history 40 years ,,, Although I have been riding this for a long time, I have never owned a Japanese standard motorbike “Cub” and naturally never ran long distance with a cub before ,,, Where in my heart Well, I’d like to ride once, I want to tour –
I thought.
When I go to long distance touring with NC 750, I always meet a guy who is touring with a Cub and talking
More and more interest in Cub gotten.
I decided to transfer from the scooter daringly to say that the the Cub’s production line had came back to Japan.

2018 Dunlop I went to the first touring today, the day before the first war.
Departure early in the morning at 6! Even though it is a Cub, as the speed comes out as it is, it departs as it is at the time of going touring with NC.

Well, first of all we have to leave!
Pashari in Naguri lake. 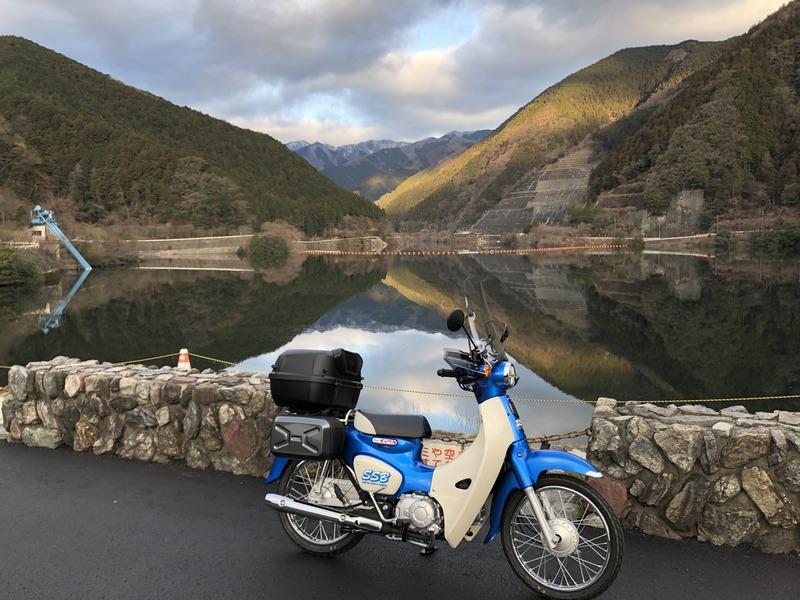 From here we will use the forest road to head to the place called “Nen no Gensan”.
On the way, I will try to go to Takesakea which I have never been to.
I feel like having a Cub as a roadbike would be a roadbiker so I can afford to have a mind. 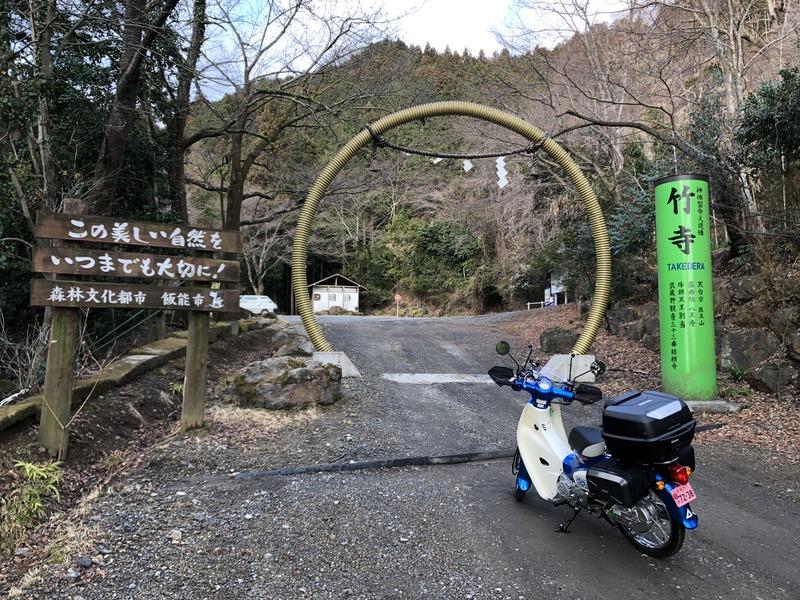 Kana is a suspicious atmosphere …

From here we head to the child ‘s authority.
Actually, the purpose of the child is not the purpose, I want to run the steep slope in front. 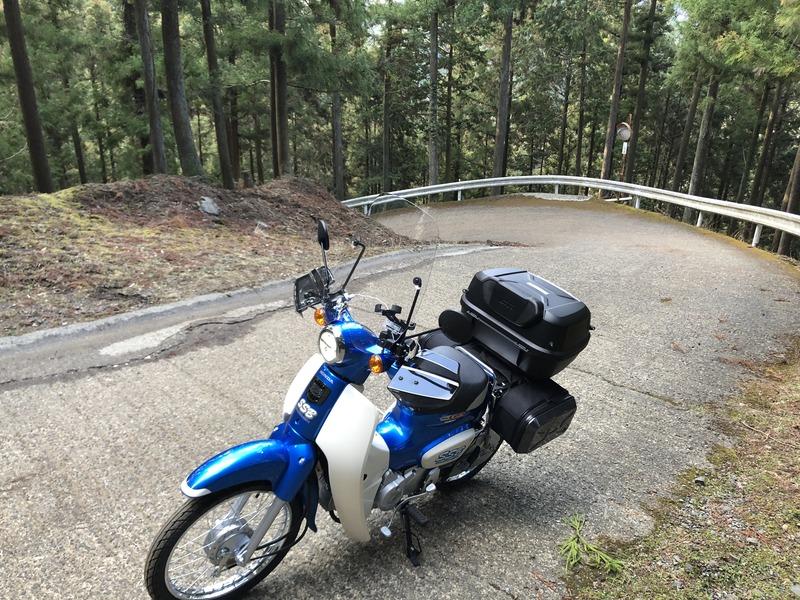 Next we go looking up on the Google map and this way! I thought that
One way to enter Oku Chichibu Green Line. .
I do not even know where I am going, so it goes by. . .
From there I climbed a narrow path, and I got out to Kamakura Lake (^ ^; 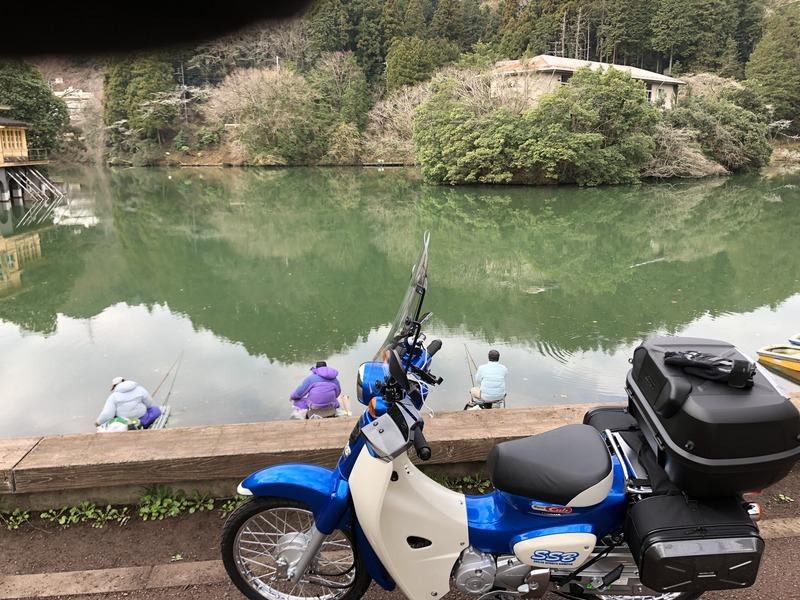 There are lots of anglers, but, Kusufi! There is no one turning back as anyone.
It will melt into such an atmosphere, is not it ~

Since I planned to enter the green line and aim at the Dopingair Observatory this time, I went back a little
I will aim for the Okuri Pass.
When I return it’s a sign of a vehicle closing ,,, (^ ^;)
What should I do? I got lost, but as I started going ignoring the road closure and running and running
Although I am constructing in some places, I pass without any blame. . .
I do not think this is a big bike ~ I guess it seems I got scolded.

I came up to this point, I noticed that the feeling of being uninteresting which I felt at first was gone.
Is the speed range the body has matched the Cub? Besides the bad acceleration also the power which does not climb the slope
It felt like normal, the thin 17-inch tires did not choose any road surface at all, even though gravel appeared
Even if wet even with snow, you can always run with sense of security …
And cornering is fun · · · (laugh) 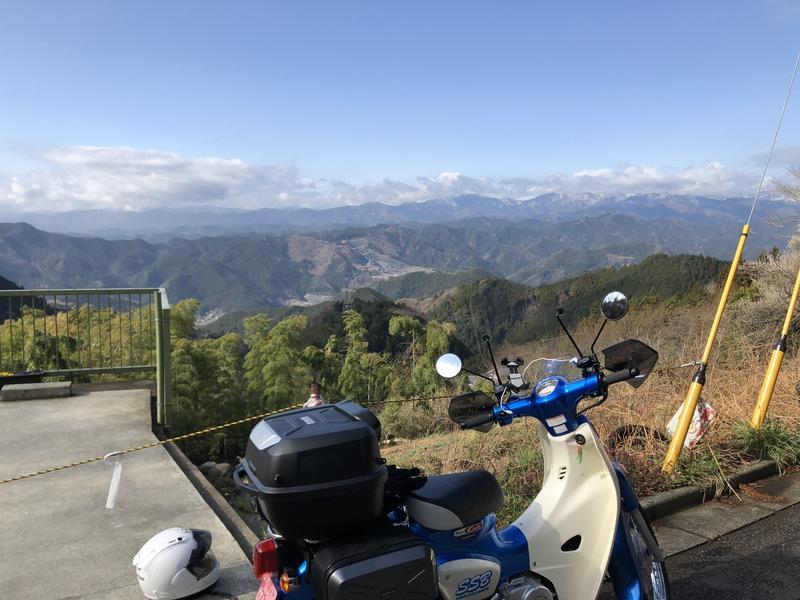 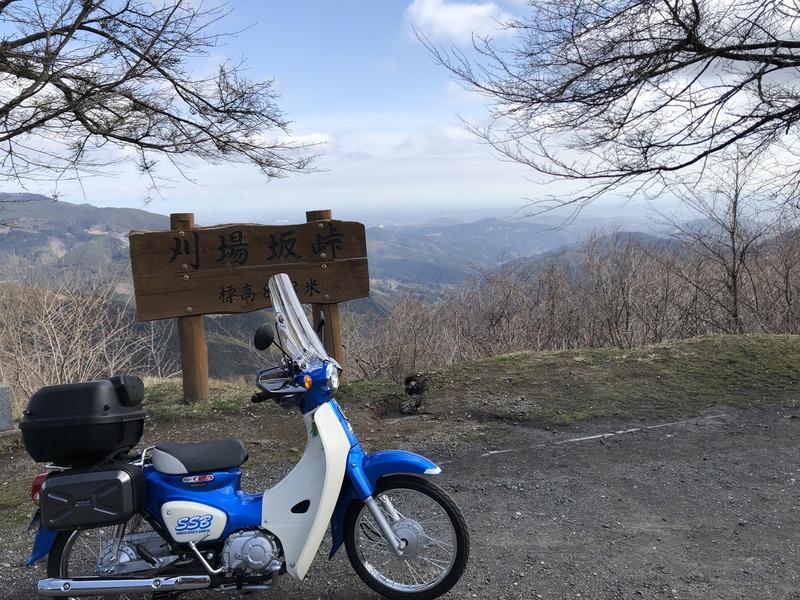 I ran into the Dahei Observatory, running from Ozaigi Pass – Kariyasaka Pass and Green Line. 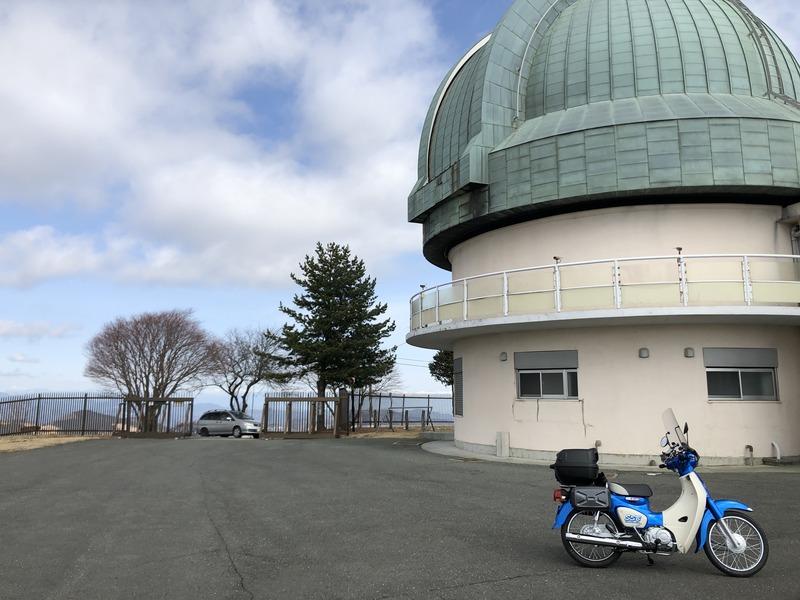 It’s cold, but the air is clear and very pleasant.
After a bit of exhilaration, I went down Jeonpo Pass, passed through Minano, passed through the Chichibu Kegon Waterfall and rested at Rika Dam. 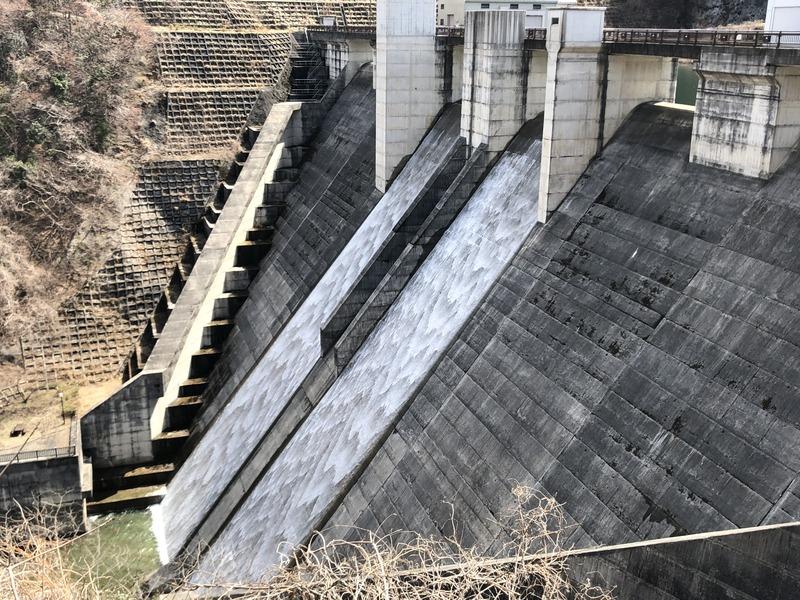 I went through Shikokino and went down to both shrines. 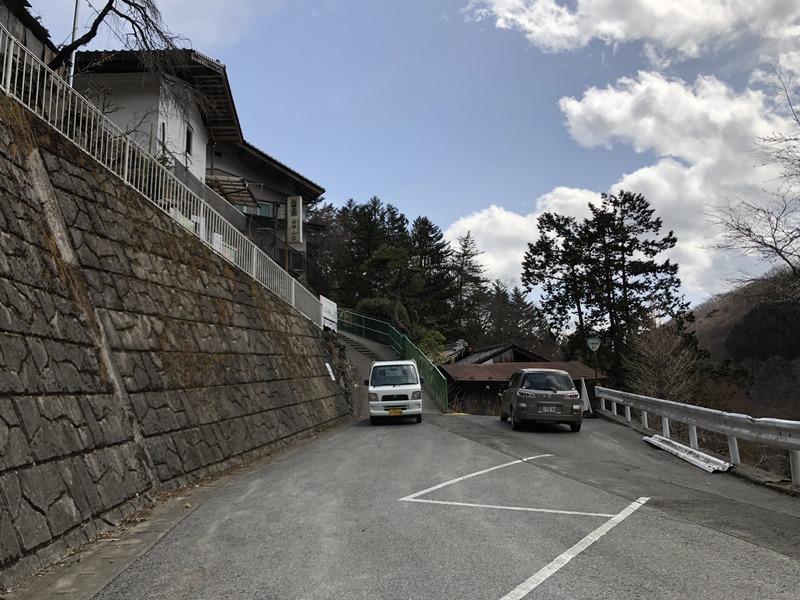 It’s already near day and tomorrow is the first race of Dunlop. .
Since I can not leave tiredness, I will go on the way back.
Chichibu, if you say Shikokano after all I have to eat Katsu rice bowl (/ ^) / 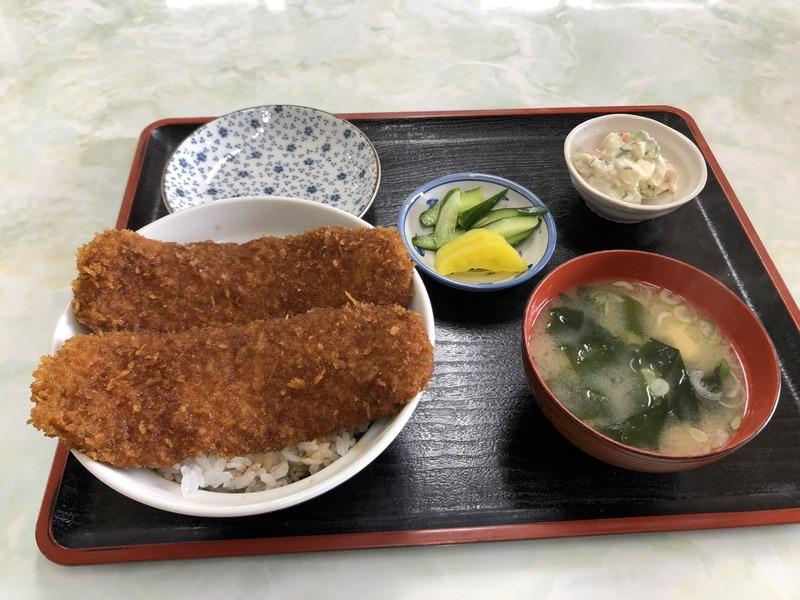 This shop! delicious! I think I’ll come back with a Cub again. .

There are a lot of touring riders as they come out to Route 140.
Will not you make me a partner when Cub ? I do not think so if I thought ~
A considerable rider peace signs.

While going to Uragami dam, running through Shimaru Pass ~ Yamabogi Pass and finally taking a break at Naguri Lake. 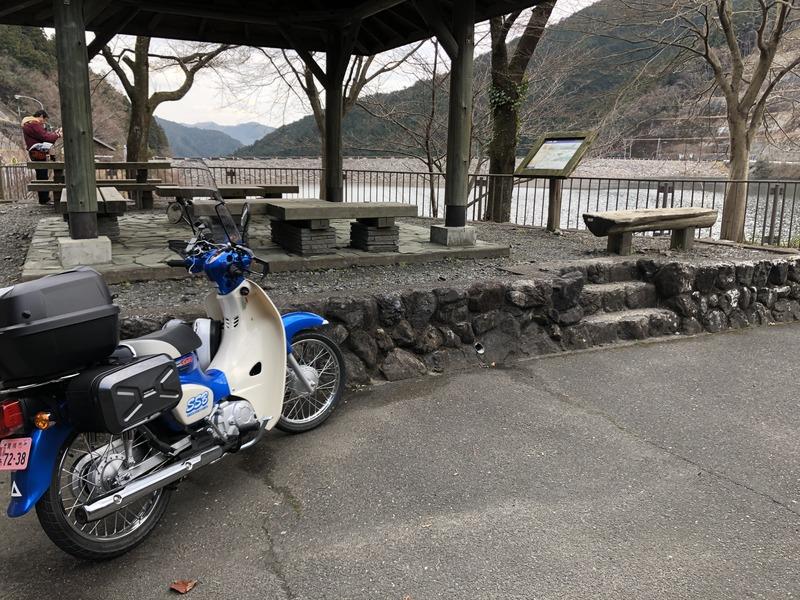 The mileage of the first Kabu Touring was 250 ?.
With only narrow streets 250? So there was a reasonable satisfaction.
But I still have plenty in my body.
It seems like going to the 400 – place touring if it is this!

Up to now I ran with various bikes, but in the meaning of running and enjoying every place Cubs are the strongest …
It was the first touring that made me feel like that.