After a long absence, I came to the office chair tea cup.

Suspicious weather continued from morning, but I was able to run dry in the morning. 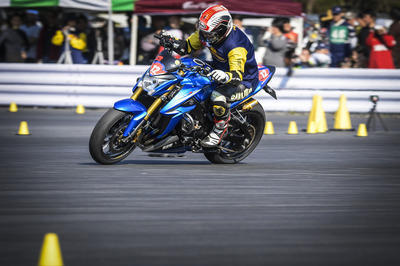 Pictures do not matter at all.

Although borrowed classes usually take shape after all classes are over.
Participation by the organizer was approved after the N class was over.

The first heat in dry condition.
Although there was a feeling that it was unable to run with the rotation by the absence of engine torque
I worked hard and ran.
If it's raw time, was it a fairly good time to say that it was a top 1 second drop?

Without feeling coming back from the VTR 250, returning the fitness will run the GSXS 1000 as it is?
Was it possible to run with a good feeling?

I got clogged in the last section, I lost the time, but if I made no mistakes I went to the flat around 10 seconds?

It seems that the body that hurt by the other day 's Dunlop Cup is recovering soon.
I want to gradually improve my condition.