I participated in the Dunlop Cup JAPAN Games held in October 13.

The JAGE practice session was held on the 12th and representative players from all over the country gathered one after another. 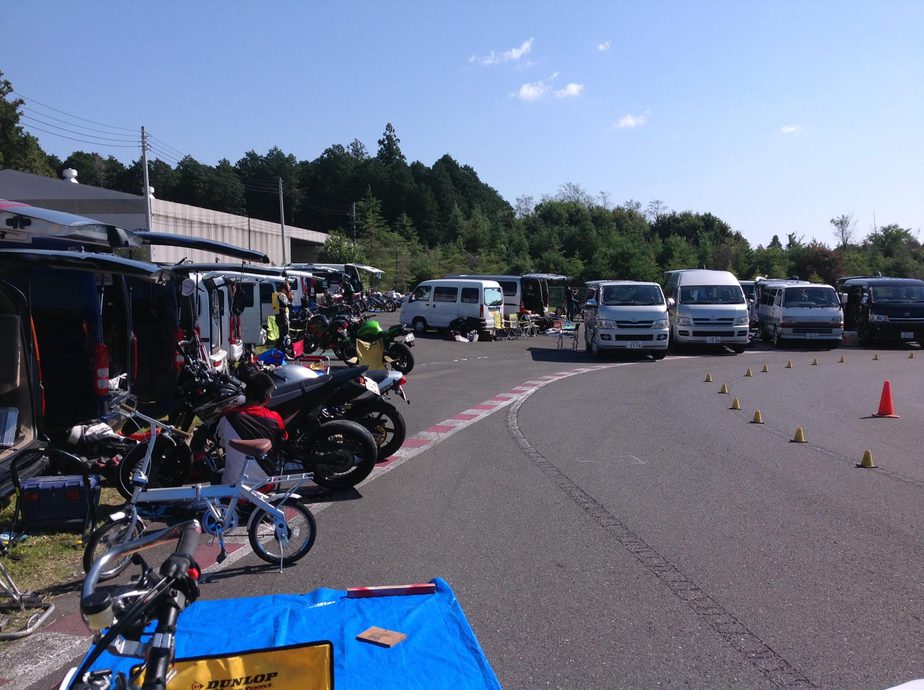 Heat that I can not imagine in October "Have you exceeded 30 ℃ lightly?"
The monsters in the whole country are running cancer rushing.
Because I was riding only on ZRX as I say, I can not ride a good 310 now.
I can not ride out again with spirit, physical strength, so practice is there so
I am involved with everyone in Slalom, I talked and spun up in the trumpo.

However, I will reflect on that I should not leave it as it is, in the afternoon tire exchange
Only two timed tacks, assuming the actual number after peeling off.
I got a good time so it ended ~

When I exchange greetings with delegates gathered from all over the country, I feel that it is JAPAN ~
It will be very fun.
Every time I stop by, is ZRX next year? To the question
"That's right – after all Jimukana is a big bike!"
While answering, I was circling around and over and over again.

By the way, this course also boasts speed overall but there is also a rotating technical section
Comfortable course setting! I like this course I guess ~

I am going to run and run in the official game at 310. I have to concentrate and enjoy concentrating and running after 4 "JAPAN 2 books 2 games in total".

And the first heat.
It was difficult course for the shift to distance
310 was able to run with a fixed first gear unexpectedly in one place.
However, there will be places to raise the 2nd gear to the 2nd gear, which comes with speed ~

In total it was safe without running big mistakes and I was able to run and I wrapped it back at 2nd overall in 1 min 25 sec 6.

2 Heat eye.
If you do not put it in the 24-second range, it is impossible for the top award to be so unnoticed so start with a spirit!

I thought, I could not fit the signal well and the start was delayed. ち
Perhaps I lost about 0.2 seconds ~

Even after that, at the rise after the rotation of the 2-chan, the front turned sideways rolling on the opposite side and it seemed to fall
Failure to return the accelerator once · · ·
In the last line tread section, even if the machine gets up, it is a mistake that will finish goal.
It was the second heat that I did not engage well, but the goal time is 24 seconds 9.
Still, I felt a sense of fulfillment that I ran as hard as I could, so I had little regret.
If all goes well, has it entered the 23 second range?

Tommy beat out the 23 second range Unexpected "In fact, 4 seconds of Pena arrived"
Super fierce battle saying that the top three are lining up in 24 seconds 9.
I was able to finish in 3rd place overall with the time of 1st heat with Pena.

It is the last race of the 5th round of the Dunlop Cup of the week after the rest of the season.

There are two more places to leave 310 runs of the official game.
I want to aim for running I do not regret.