3rd day.
I will go to see the sunrise of the exhibition Haikai that I was planning (^ ^ ♪
At 5:30, because it was saying sunrise, I left the inn at 5:00, pass on the way passed through a pleasant route and fun went through and arrived at the parking lots of the Haikou peak.
I could not see the refreshing scenery with a bit of mist, but I was able to worship the morning sun. I was talking with a local uncle for a while at this observatory, but it seems that the sea was beautiful in the past.
It seems that the ocean will become dirty as it feeds the food after aquaculture has started.
Such information is unique to solo touring with a lot of conversation with locals – I wonder why I am leaving for Gujibijima, the next destination.

Is this Kishimajima, on the map a peninsula of continental age? I think it is actually a fine island.
You can see the river-like strait. 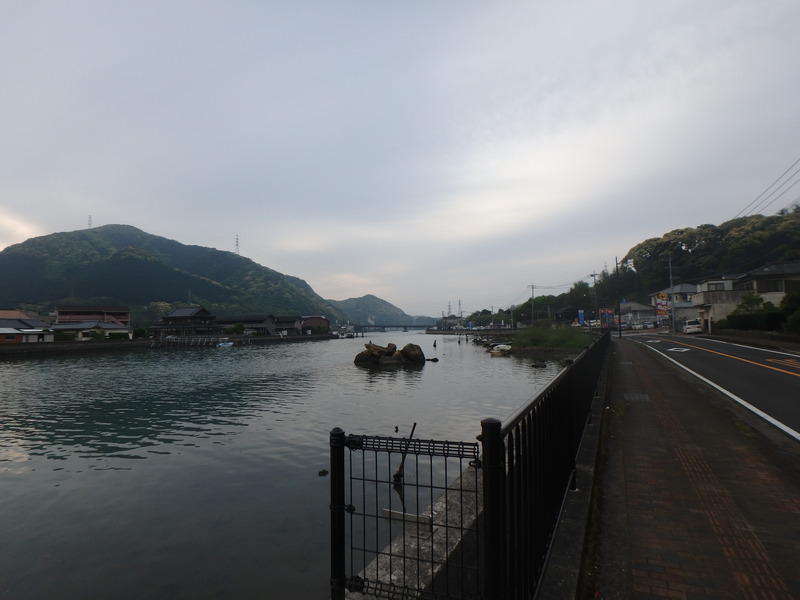 According to the information it seems that there is considerable force when the tide flows, I could not see it unfortunately this time.

There is Huis Ten Bosch in this Kishibarajima Huis Ten Bosch looks to the side and then aims to send Kishibajima transmission.
The concrete huge radio tower here is impressive full mark! I am making a mysterious atmosphere somewhere.
It was still earlier and I could not get in, but I was able to take a picture of monopoly. 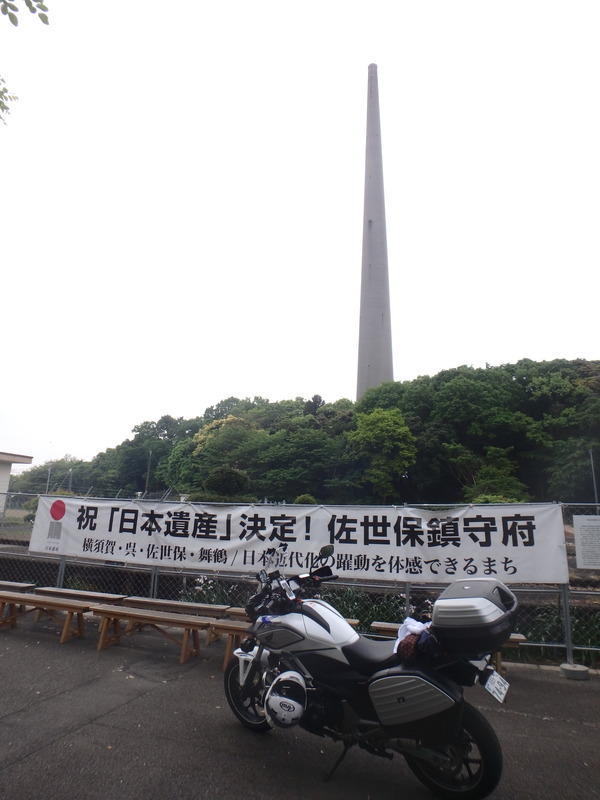 I ran from the Nibao Island to the Nagasaki Peninsula, I ran the prefectural highways 205 – 204 and the mountain, and went back to the prefecture road No. 229 back to the recommended route of the prefecture road map, but it was awesome ~ this road is amazing! 205 is a wide and clean road with a beautiful track
Although the road No. 204 is a bit bad, but it gets speed as it is, a long straight line suddenly appeared suddenly changed route
No. 229 is a little narrow but a strong Kunekune route.
Although this route, about 70? Trips, it only met two or three cars!

I am tired of running Kunekune so I decided to go to the port at the tip of Fukikoshima and make it Mattari Coffee Time.
I will definitely be in a place that is not as popular as possible. 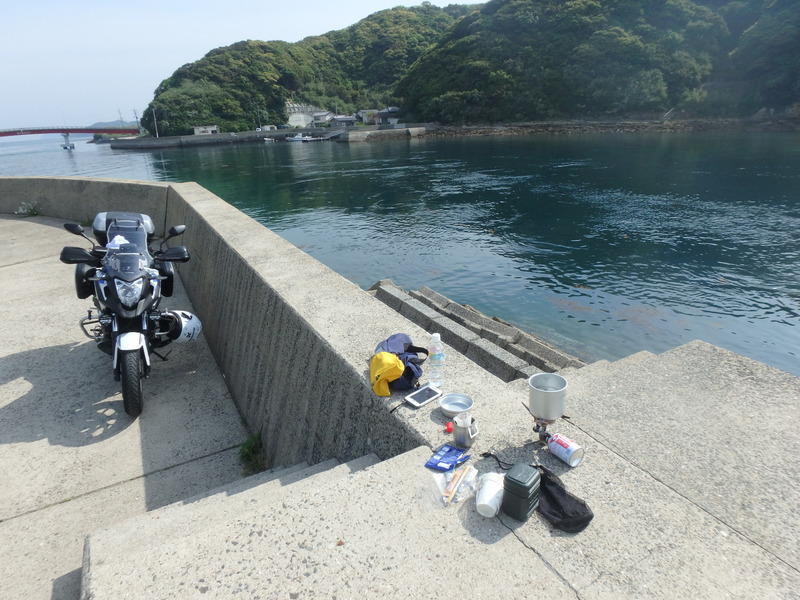 I would like to go to a warship island or Ikeshima this time with a mere hour of running.
However, I have not done even a preliminary examination, and I do not know the sightseeing boat field if I made a mistake a little for a while (^ _ ^;)
I ran over the coastline and the warship island was visible on the right hand side.
Well it's already lunch and it's getting too much troublesome so we decided to take a luxury lunch at a shop where we can see the warship island. It is a grasshopper perfectly suitable for solo touring. 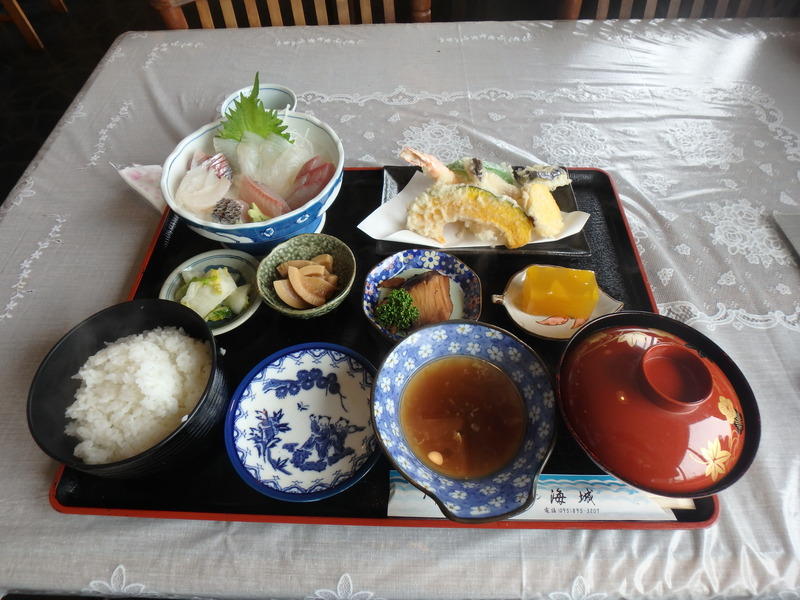 Furthermore, we aim for the tip of Nagasaki Peninsula.
It is recommended that it is recommended in Touring Maps.
Well ~ Well it will be such a thing.
There was a sign of the distance to various places. 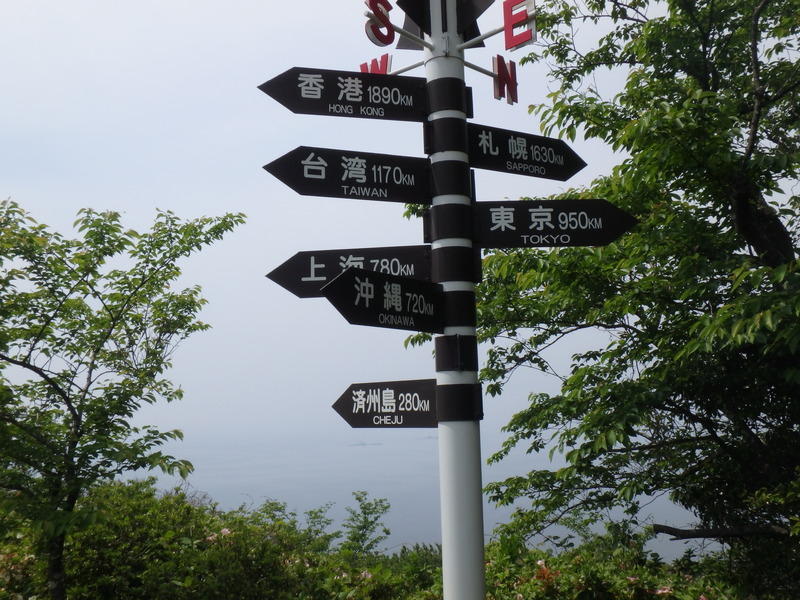 I was getting the information saying that the prefectural road No. 34 here is good from you, but surely it will end up disappointing if it is a regular rider, I guess surely I will not want to be disgusted ~
But Jimkarna riders are okay! I enjoyed plenty (^ ^ ♪

I just kept running from morning all the time and I got very tired. Tonight we will stay at Nagasaki so let's walk a little and go sightseeing! I entered an inn in Nagasaki by saying.

I got to see sightseeing after I got to the inn.
Walk for about 10 minutes and arrive at Holland Saka 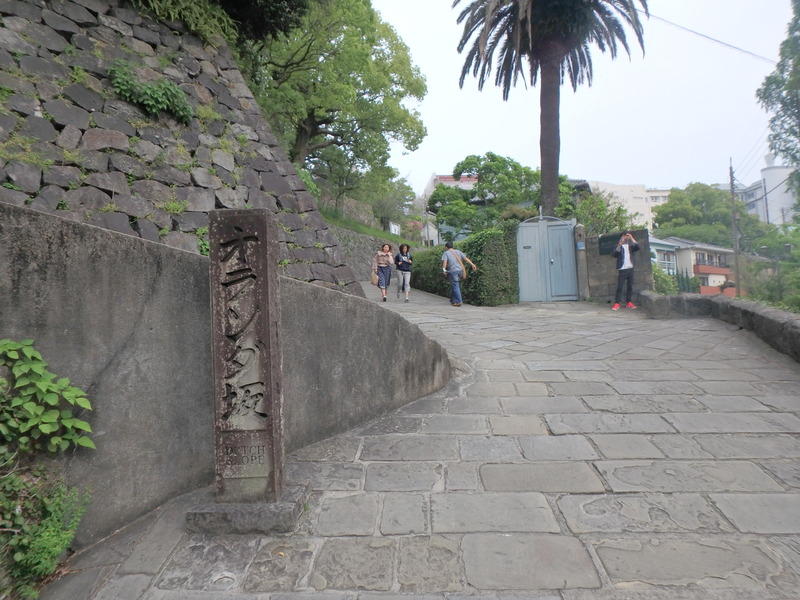 From there walk down the harbor 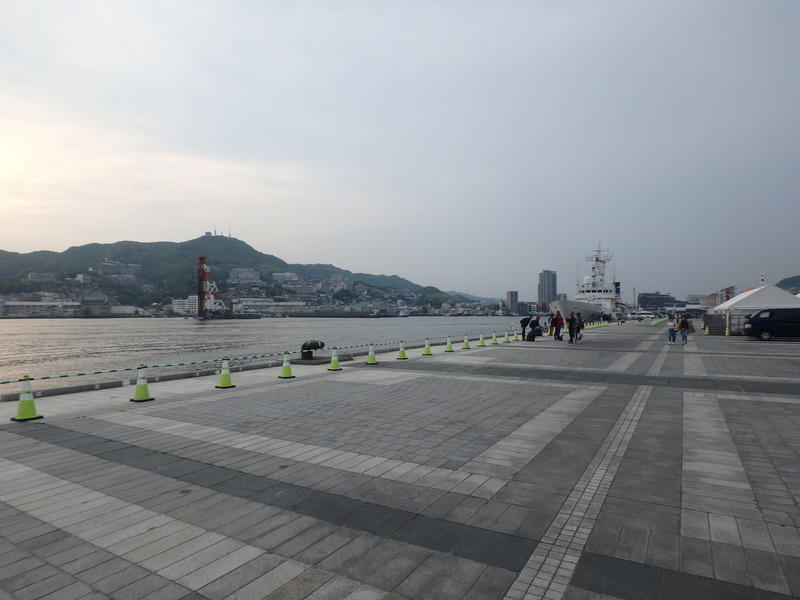 I went to see Dejima. 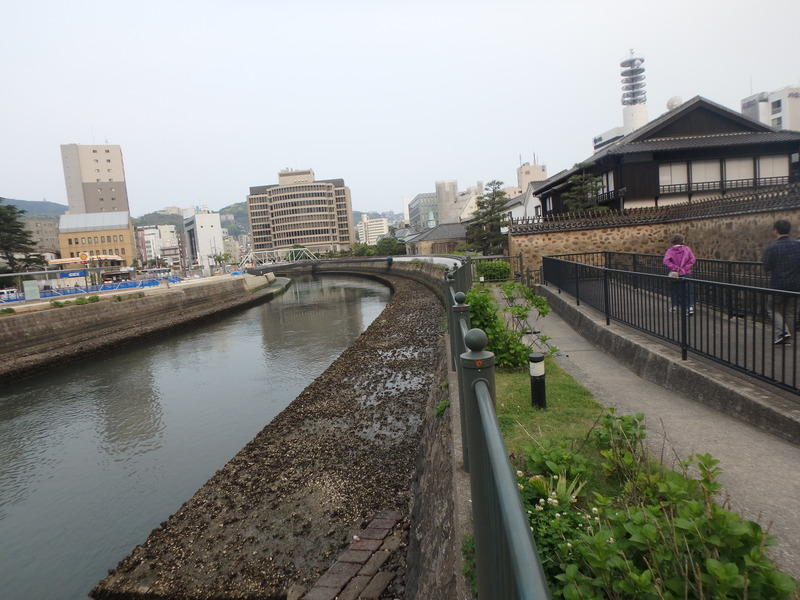 By around this time, tired mode 100%
Let's go to Chinatown soon and eat Nagasaki Champon!
I go to the shrine and go to see the night view of Nagasaki (^ ^ ♪

And I went to a shop called Fukuju recommended locally instead of sightseeing guide. 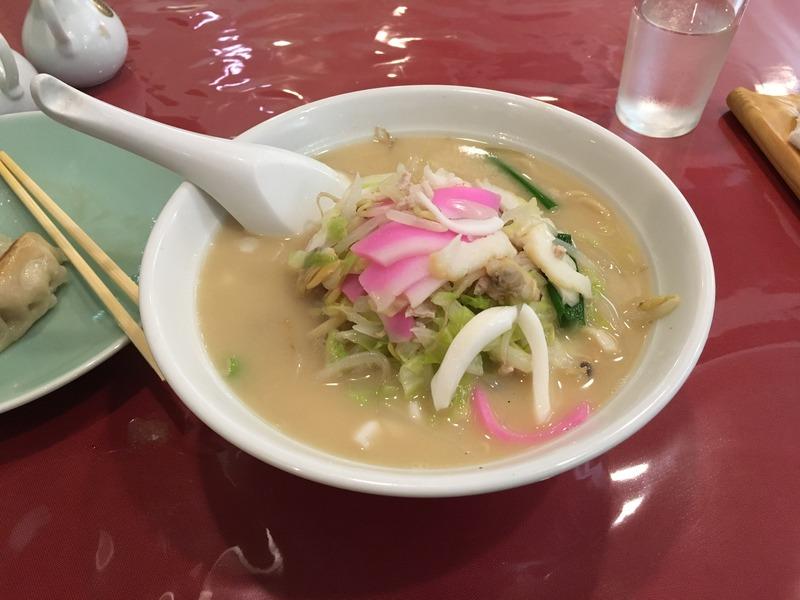 Nagasaki Champon here was delicious with a gentle taste! I usually do not drink juice, but I finished the juice completely. The gyoza I ordered together was also delicious Incidentally, although the dumpling is not on the menu, it seems that it is popular according to the listening and removed from the menu. . Really~~~~? Lol was certainly delicious.

I left early in the morning at 5 o'clock even today! "Zizhi mode is fully open"
Actually, today's purpose is to eat a Shimabara specialty potato chan!
For potatoes that I love potatoes, I can not go out.

However, the selling Tsubaishi Tourism Center is the entrance to Shimabara Peninsula.
I will pass before opening.
I had no choice but to run to the tip of Shimabara Peninsula in a stroke and returned to Unzen Green Road.
Let's have time to go so let's climb the Unzen road and go to eat the chan ~

I will go up the pleasant Unzen Road.
The moment when the corner got up ZRX 1100 that has been seen from the oncoming lane is getting up, is not it (^ ^ ♪
That's right, it was Mr. Uranai, who was tied with a black string. . Lol 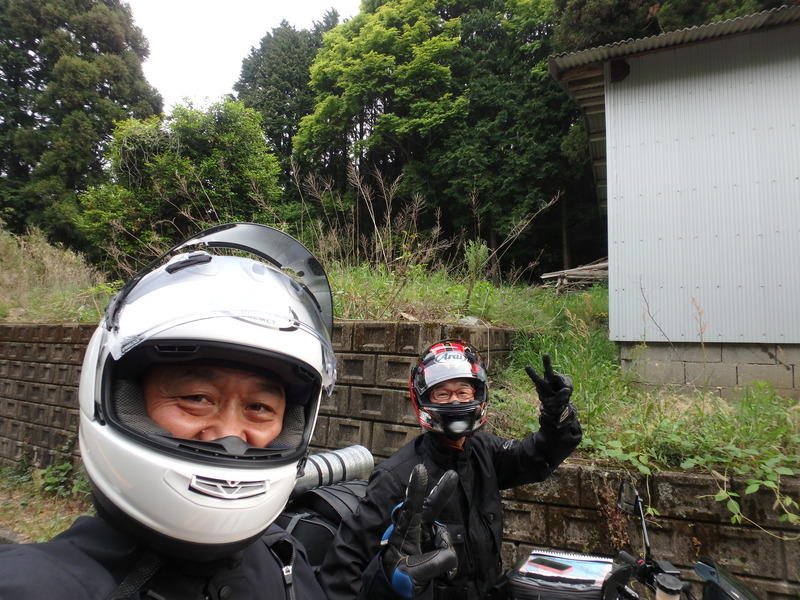 I will eat a potato! When I say that to go – saying that it goes down through the Unzen hell before going down the prefectural road No. 128 and arrive at the Tsenyoshi Tourism Center. 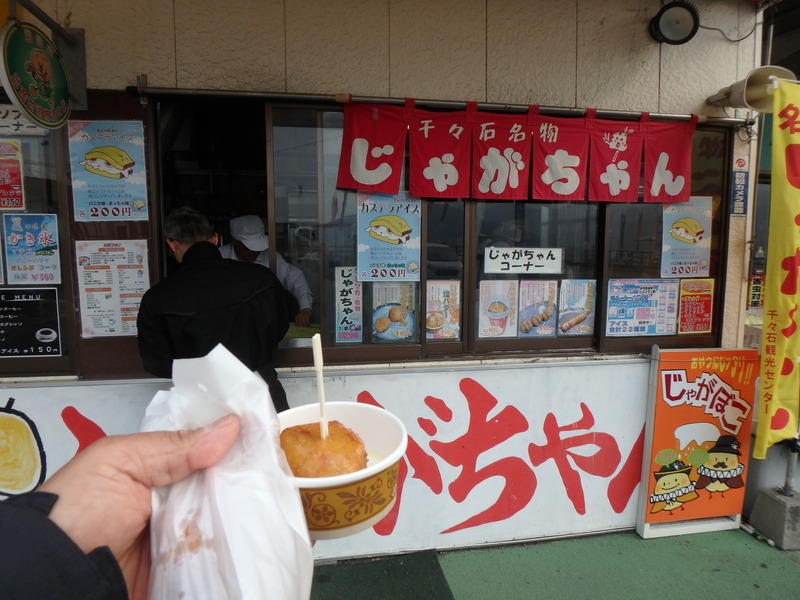 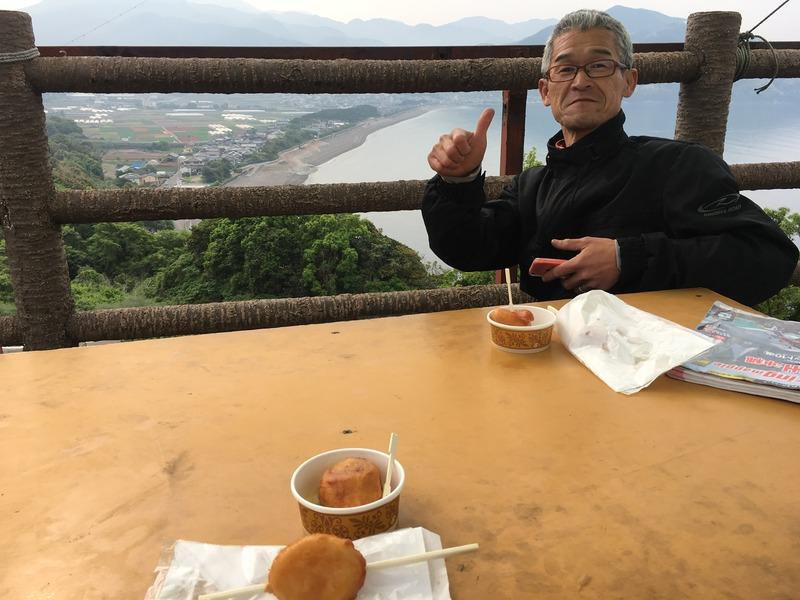 Talking and chilling for a long time.
I run the prefectural highway No. 210 and climb to Unzen at National Highway No. 389.
From there enter the Unzen Nitta Pass. This is one pass road.
Climb while enjoying the atmosphere slowly.
I tried riding the Unzen Ropeway on the way.
This is a magnificent view overlooking Ariake Sea while watching Fugetsake.

From the top, you can see where the pyroclastic flow has flowed.

A scenery that will never get tired even when you stay. it's the best.

When talking with Mr. Uranai, there seems to be something mischievous in Shimabara's specialty!
Let's go with this. By saying that I entered the town of Shimabara running through Shimabara Mayuyama Road descending the prefectural road No. 57.
Finally found a shop, it was pretty crowded.

This is cooked dishes,. 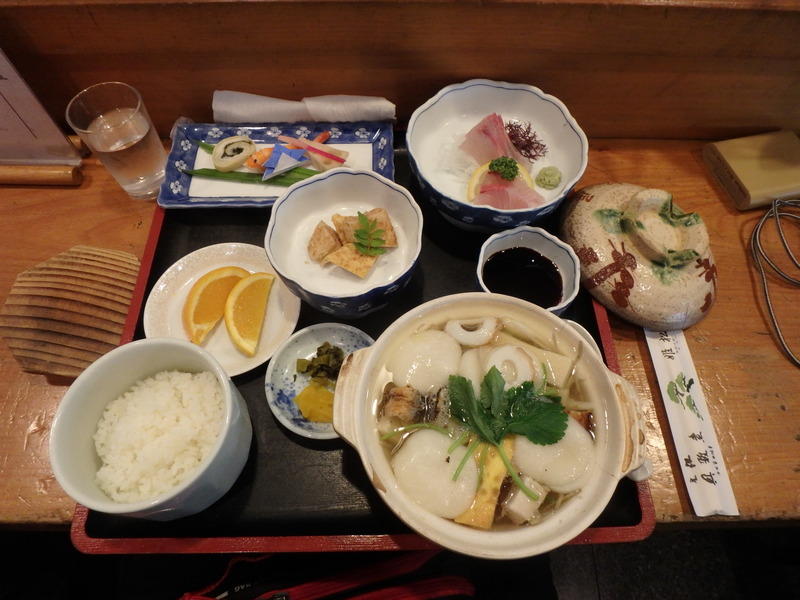 The shrimp that was attached was in the form of Mutsurou! 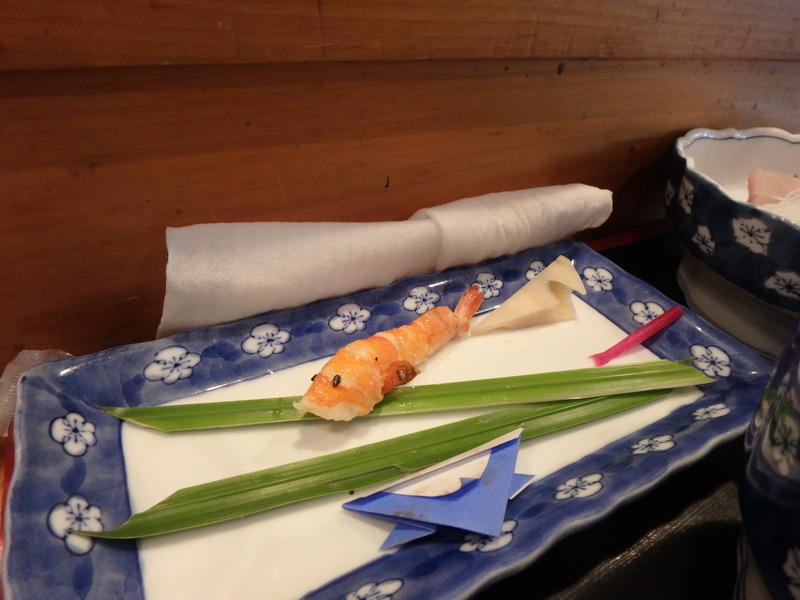 This ingredients cooked! It was quite delicious! It is easy to understand because it contains a lot of ingredients in soup

Uraike is going around the Shimabara from now on, and I broke up at the ferry platform by saying that I will cross Kumamoto.
Thank you for a nice time.

I am in Kumamoto on a ferry.
As soon as the seat hangs, I decided to go see the rumored Kumamoto Castle when I can not see it.
As I passed through the crowded streets, I arrived at Kumamoto Castle, where the walls are collapsing.
Then I was able to speak to the elderly couple who came by side car to the parking lot.
The old couple also got their grandchild. 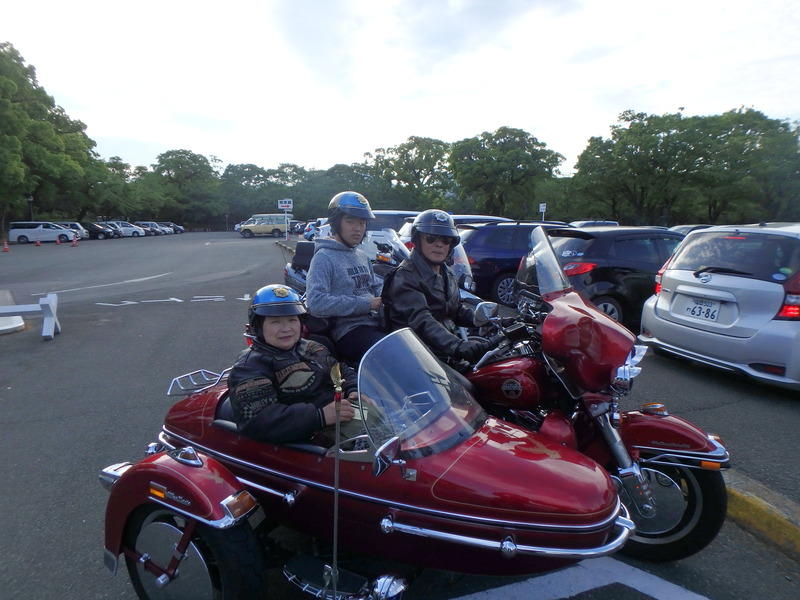 It is cool ~ I would like to take such age. 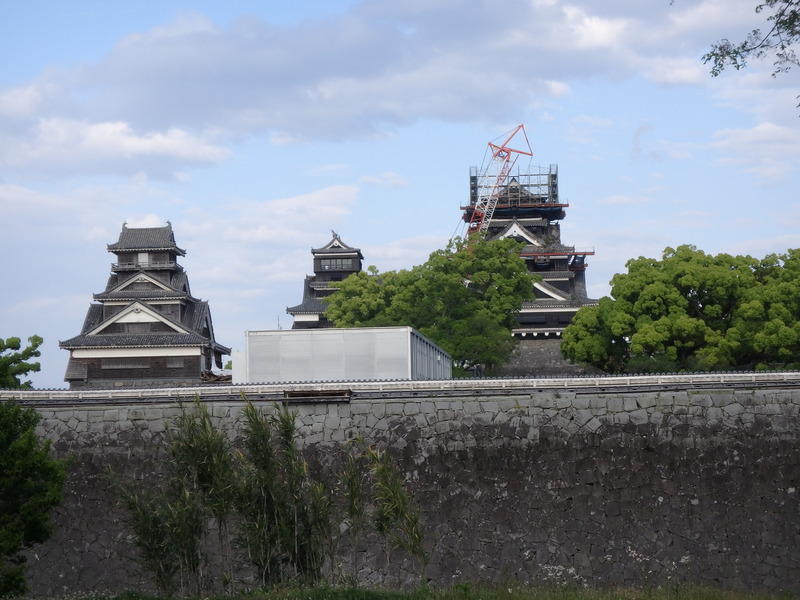 When I thought that I was not pushing a lot of time, when I called the inn, it would take two hours from there, so it will be late for dinner if I arrive late! I am surprised (^ _ ^;)

As I climb up in haste, leaving Navi, the road sign 57 is blocked. Escape to Milk Road!
Learning from the signs and entering the milk road, the downhill is terrible congestion.
This climbs up, climbs up and the traffic jam continues.
Traffic has continued to the town of Aso rather than Taikan peak.
It is hard work (^ _ ^;)

I arrived at the inn before dinner and was relieved. .