As I had declared before, I have tried Kawasaki 's new Ninja 400 in the third race of the JAGE Cup. 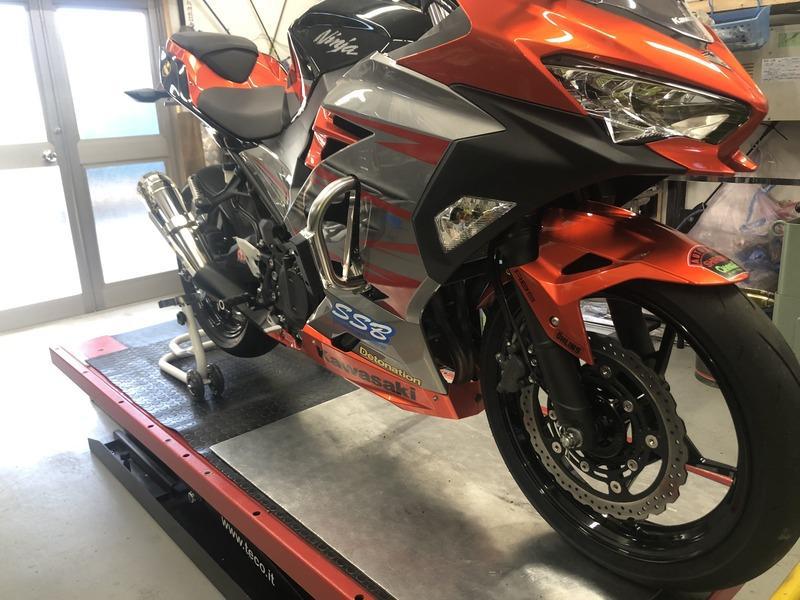 Then I finished the machine with a sudden construction work.
First made the base setting and tried Krisp. .
We improved further from the result of running and tried again in the next week 's Krisp.
Further improvements, resting on Friday before the competition and trial run. .
And further improvements · · · and tournament · · · (^ ^;

The problem is lack of rear traction. . .

I wish I could go even a bit.

Because this course was a well-balanced course as it opens with details
It is exactly right to explore the current potential of Ninja. .

1st heat
Although the balance of the whole was a good feeling in practice running, as rear does not settle a bit at the time of passing through the gap
I try to increase the pressure side damper by 2 notches,. The balance at this point was a pretty good feeling
Start as it is.
I ran with a good rhythm to the whole but I feel a sense of incongruity still in rear. .

That run is this.

I finished in 4th place overall!
Well, saying good-bye or having a problem but saying that you can stay in this position would mean that the basic capabilities of the machine are high.

2 Heat eye.
Since it is all right, I will try another challenge.
Try increasing 2 notches on the compression side damper.
I calmed down as a whole, so let's go as it is!
As soon as you start, which one? Fail? What?
The rear is heavy. .
Since it can not be helped, trying a lot and trying is also a bad rhythm. .
So I upgraded to the 2nd gear dare to the entrance of the crank which ran in the race cutting in the 1st heat.
I will drop it to a foot by further entering. .
Is the slipper clutch put in genuine effective?
I could enter the crank without the car body being greatly disturbed.
It is likely to be raised to 2nd gear without hesitation even in the upcoming tournament.

Although I lost the time due to setup failure in the second heat
Finally I was able to finish in 5th place overall.

It seems likely to be able to identify the cause of discomfort of the rear so far
It is expected for future evolution. . .