Finally, we have participated in the 2021 Dunlop Cup Round 1. 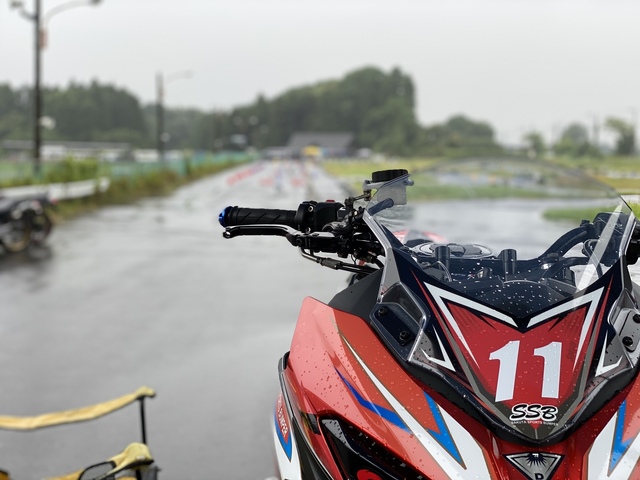 The photo is irrelevant.

This season, both the machine and the rider have been finished tightly, so it should be a enthusiastic tournament, but I feel relaxed and less nervous.
I just want to be able to show what I’ve done so far! I felt like saying.

However, the weather forecast is suspicious and by the time Class A starts, the probability of precipitation is 50% or more, and I want to run in the dry!
I was full of that feeling.

C2 → N → C1 → B and the dry process is proceeding smoothly. Can this be done dry?
When I thought so. .. It has fallen. (； ∀ ；)
It’s raining with Salah rather than rain with Zah. .. It doesn’t feel like getting wet all at once. ..
It’s a very confusing way to choose a tire. ..
I brought the α14 for rain, but I couldn’t decide, so I decided to go out with the α13SP and waited for my turn.
It felt like the temperature had dropped all at once as the downfall became stronger from the middle of class A. ..

This course is very slippery compared to the warm-up course. .. .. Even if the bike is standing straight, the rear tires will start to slip due to acceleration.
For Gymkhana, who runs the first course without a test run, this completely non-grip road surface is only a horror.
How far can you attack? I don’t want to get hurt at this age. .. ..
“The road surface in Tsukuba shows a completely different face every time, but this time it was the worst slippery road surface.”
You can only run by stopping the accelerator at the point where it starts to slip and holding it down with minimal slip. ..
You may not be able to respond if you slide a lot in terms of physical strength. .. ..
I managed to reach the goal by running while asking myself.

Many riders canceled the run in the second heat,
Since I became a class A player, I have been thinking that class A has a duty to run in any situation, so
As long as I’m not injured, I’ve been running with courage unless the organizer decides to cancel.
You don’t have to run fast, and you can protect your body by controlling it with your own riding. ..
Novice is running hard in this bad weather, so what if the top categories A and B don’t run?
I ran hard with that feeling.

I like and admire the spirit of the rider who challenged and ran even in such bad conditions.
I would like to be proud of the fact that I also ran through it.

For the next tournament, I want to run as hard as I can in the dry. ..